Ethereum VS Ripple: Which One Should You Invest In? 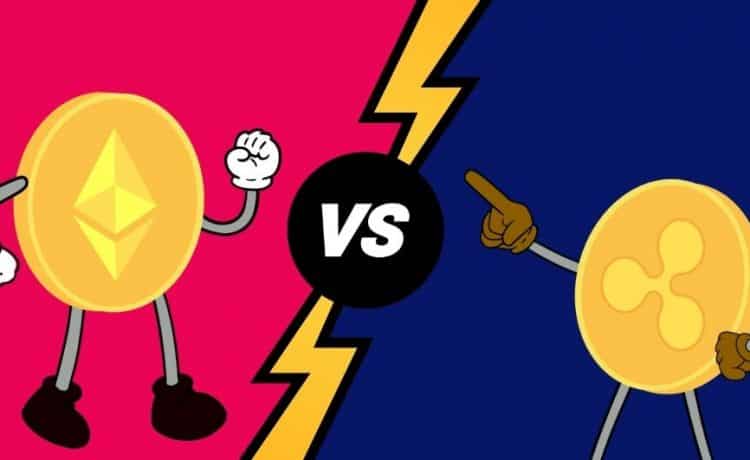 Are you confused about whether you should invest in Ethereum or Ripple?

After Bitcoin’s initial success, several crypto coins came into existence. Altcoins Ethereum & Ripple have gained prominence over the past decade and have become Bitcoin’s strong competitors.

Crypto investment has become a hot trading option these days because of its enormous profitability. The volatility of cryptocurrencies—upward growth—is why people choose crypto trading over traditional trading; freedom from taxes and government regulations is also what draws traders in.

The development of Ethereum began in 2014, and funds were raised via crowdfunding. It officially went live on 30th July 2015 as an ICO (initial coin offering) with 72 million pre-mined coins.

Ripple was launched in 2012 as a centralized platform facilitating global transactions of funds with its coin XRP.

Ripple aims to work with banks and financial institutions to conduct funds transfers via its coin XRP. When it launched, 100 billion XRP were released in the market.

Ethereum and Ripple use different algorithms and transaction protocols known as consensus mechanisms.

Ethereum is based on the proof-of-work (PoW) algorithm; miners need to add blocks to the blockchain by solving complex equations— and compete with each other to finish it first. The mining process relies upon a computer’s hardware like graphic cards, wallets, GPU drivers, and software like a mining application.

Ripple, on the other hand, utilizes the Federated Byzantine Agreement (FBA). FBA simply requires joining each node to a smaller number of other nodes. This can be done upon a server that is simply connected to the Ripple network.

Therefore, the FBA mechanism is much more secure, faster, cheaper, and efficient than the PoW mechanism.

The efficiency of a fund transaction system relies mainly on its cost and speed. The faster a technology system, the more preferable it is to its consumers.

However, Ethereum 2.0 is supposed to improve transaction speed as Eth 2 will upgrade the platform from proof-of-work (PoW) to a proof-of-stake (PoS) consensus mechanism.

Ripple XRP was launched with 100 billion XRP in the market. Its market supply is essentially controlled by Ripple Labs, which primarily contributes to its market stability. Currently, 45,404,028,640 XRP coins are available in the market as per CoinMarketCap; XRP has a market cap of $14.5 billion.

Unlike Bitcoin, Ethereum does not have an absolute cap over the total number of Ethers. Initially, 60 million were created and released into the market. The coin now has a market cap of $138 billion.

According to CryptoRank.io, Ethereum ranks second in the crypto market, and Ripple comes number fourth.

Should you invest in Ethereum or Ripple?

Investment in Ethereum or Ripple is guided by three factors: an individual’s risk appetite, current trading portfolio, and expected returns. Before investing in it you must check out Ethereum & Ripple Forecast by industry experts to gain knowledge about the same & achieve more profit.

Let’s see what the several advantages offered by Ethereum and Ripple are:

Comparing the advantages of Ethereum and Ripple

Crypto trading is similar to traditional stock market trading; however, it is always essential to understand all trading nitty-gritty before investment.

We hope this article has helped add valuable insights to your existing knowledge of cryptocurrencies and crypto trading. With the comparison guide, you should understand the key differences between Ethereum and Ripple and help you decide which one to use to build a diverse and robust trading portfolio.