Mistakes to Avoid When Bitcoin is Going Down 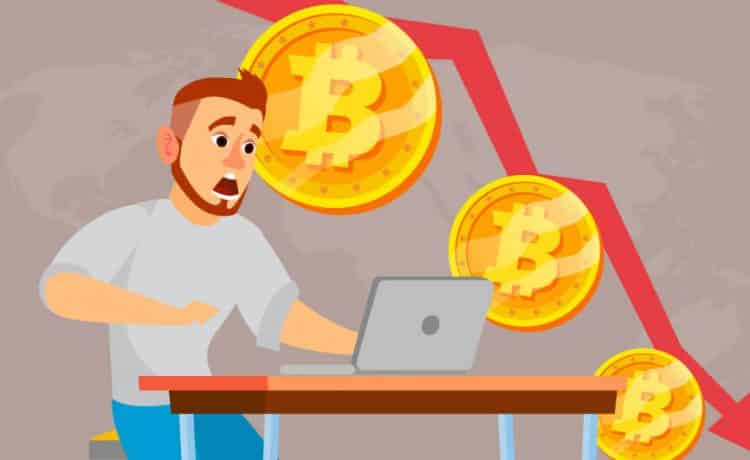 In slightly over a decade, Bitcoin has achieved what most cryptocurrencies strive for – the name, the fame, and the value. Although it was introduced with the hype of replacing the traditional currency, it emerged as a safe haven asset owing to its consistent price rise. Because of dual advantages, Bitcoin is now the most sought-after digital currency among investors and traders.

While some might question why Bitcoin was even created in the first place when we had fiat currencies, stocks, and commodities with the same benefits, they should know that it is the security, anonymity, and transparency of transactions making all the difference.

The secret identity behind Bitcoin, Satoshi Nakamoto, capped the overall virtual currency supply at 21 million. As of today, more than 18 million Bitcoins are in circulation. Bitcoin derives its value from the volatility that results from its supply and demand in the financial markets. So, whenever there is an increase or decrease in the Bitcoin trading volume, the digital currency witnesses massive price fluctuations. Lower prices seem an exciting opportunity for new investors to enter the scene. In this article, we’ll pinpoint a few mistakes to avoid when trading.

Why Does Bitcoin Go Down?

For the most part, the demand for Bitcoin is driven by the fear of losing money amid unstable global economic situations like recession and hyperinflation. With more and more people investing in Bitcoin, the supply starts nearing closure. In effect, the price begins to skyrocket. And it is the last transaction in the Bitcoin marketplace that determines the real-time worth of the digital currency.

But the problem arises when people start selling their Bitcoins to profit from a surge in the prices, causing a sudden plummet. However, minor price movements are natural, given the volatile nature of Bitcoin and how trading works, and technically are not considered a drop. With that said, if the downward price trend prevails longer than expected, it creates panic.

Tumultuous trading activity and investor sentiment are to blame for the Bitcoin prices going down. Besides, Bitcoin is not governed by central authorities, encouraging investors to invest and trade as quickly as possible. With so much happening and uncertainty in the Bitcoin market, one must scrutinize it before making any major decisions.

Mistakes To Avoid When Bitcoin Is Dropping

The most common mistake that investors make when the Bitcoin price drops is to hold onto it and wait for it to touch the lowest mark. While it may sound enticing to invest in the digital currency at a minimum cost and then reap the profits from price changes, it is almost impossible to predict when the Bitcoin value will hit bottom as it can move upwards anytime. Hence, waiting for that perfect moment could be detrimental as far as profits are concerned. The best strategy to avoid this mistake is setting margins for trade and investing a small capital.

Although a careful analysis of the Bitcoin price chart will help you understand the market and identify the right spot, dedicating more than enough time can be counterproductive. The explanation why it may be a waste of time is that the increases in prices are natural. It would be up at one time, and it may be down at the other moment – as simple as that. So, instead of sticking to the trading screen, it would be better to devise a strategy to make the most out of price drop, such as setting a limit-order and keeping an eye on the short timeline.

Patience is the key to trading, and the same goes true with Bitcoin as well. There is no denying that price turbulence could be positive, but there might be instances when it will hover around the same bracket or dips further. In such circumstances, Bitcoin holders begin to think of selling their assets for the cryptos that show price improvements, which they might regret later. Bitcoin has a reputation for giving its users a reason to smile and panic in quick succession, so the smart move to avoid this mistake is to wait it out.

Understand, If It Is The Right Time To Sell Bitcoin?

Bitcoin acts like an asset, and you need to sell it at some point in time to profit from it, but the question is when? Among several signs that can mean it is time to sell Bitcoins are achieving your investment goals and another crypto gaining more value.

Although, you can avoid these all mistakes by choosing the right Bitcoin Robot for you. Bitcoin Robot is an automated or programmed trading platform that works in a fully automatic way and leads you to make profit. Immediate Edge is one such Bitcoin robot that is most secured and trusted by many traders. To know more further check out fair Immediate Edge Reviews so you can get a better idea about this innovative platform.

There are some rules to Bitcoin trading, and refraining from making investment decisions in haste is one of them. Buying or selling Bitcoins are the immediate responses from investors to the significant price drop. But Bitcoin is a profitable asset, provided you are well-versed with the market and persistent in actions.