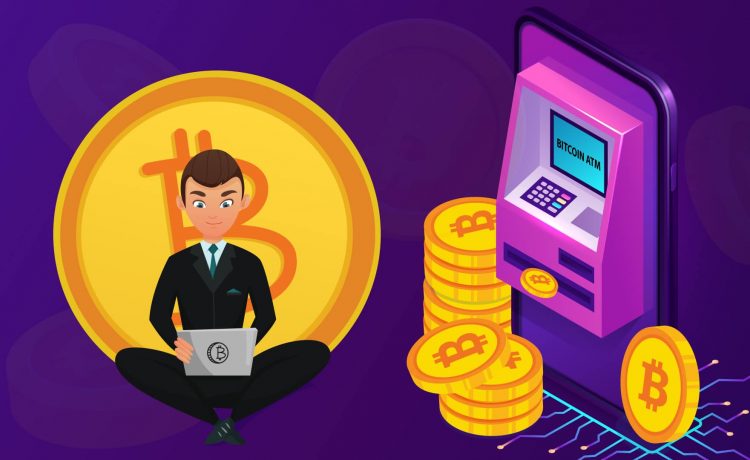 In recent years, Bitcoin has been catching up to fiat currency due to its increased use in business-related transactions. Bitcoin ATMs give users equal access to virtual and fiat currencies. Bitcoin ATMs are easy to use and secure since they don’t require access to bank accounts.

History of the Bitcoin ATM

The first time a Bitcoin ATM was installed was on October 29, 2013, at the Waves Coffee Shop in Vancouver, Canada. The US got its first Bitcoin ATM in 2014.

An Intro To Bitcoin ATM & How It Works

A Bitcoin ATM, often abbreviated as BTM, is a kiosk that doesn’t look too different from a regular  ATM but differs from it in terms of functionality. Most Bitcoin ATMs can be used to buy Bitcoin, but some of them let you sell as well. Bitcoin ATMs are categorized into unidirectional (one-way) and bidirectional (two-way). A Bitcoin ATM establishes a connection with the Bitcoin wallet or decentralized crypto exchange instead of a bank’s centralized servers. Depending on the design, a Bitcoin ATM can either transfer Bitcoin directly to the Bitcoin wallet or to a paper receipt it generates and prints offline during the transaction. The amount of Bitcoin transferred to the user’s own digital wallet, or the price of the purchase is dependent on the current most favorable Bitcoin exchange rate, which the ATM retrieves from the internet in real-time.  For the lack of regulatory compliance with the KYC/AML standards and to discourage transactions in large amounts, most Bitcoin ATMs have restricted transactions to $1000-$10,000. Bitcoin ATMs do charge a transaction fee averaging 7%-12% for the service and factored into the price

Although Bitcoin ATMs can cost users more in transactions, there are many advantages of using them, such as:

How to Use Bitcoin ATMs?

Operating a Bitcoin ATM is simple and requires only a verified and active Bitcoin/digital wallet to make it work. Here are listed the instructions to use it:

You need to follow the same steps when selling Bitcoin at a Bitcoin ATM, except for tapping the SELL BITCOIN option, scanning the QR code generated by the Bitcoin ATM, and withdrawing cash instead of inserting it.

As of today, there are more than 5,000 Bitcoin ATMs installed across the globe. Below is a list of the best Bitcoin ATMs:

Where Can I Find a Bitcoin ATM?

Usually, a Bitcoin ATM can be found inside retail stores, malls, restaurants, or airports. You can also locate the one near you using the dedicated web-based services, such as CoinATMRadar, FindBitcoinATM, and Bitcoin.com. Just enter a location and then navigate the Bitcoin ATM map to find the closest one.

The growing acceptance of Bitcoin is the reason why Bitcoin ATMs are the need of the hour. Because of intuitive and added security features, buying and selling Bitcoin with a Bitcoin ATM has become more convenient and anonymous. With the increasing number of Bitcoin vending machines and online tools, finding a Bitcoin ATM is no more a struggle. Even though the transaction limits and high transaction fees are causing fewer people to stop by, there is no doubt that Bitcoin ATMs are catalysts for Bitcoin’s mass adoption. Various ATMs charge differently, so take the time to research these machines before purchasing or selling Bitcoin for cash. Apart from that,  If you want to invest in Bitcoin and make good money then Bitcoin Code is the platform for you. It is an automated trading platform that helps you make a good profit. Check out Bitcoin code reviews to get more details about this unique and innovative platform.