IOTA Vs. Bitcoin- A Comparative Analysis 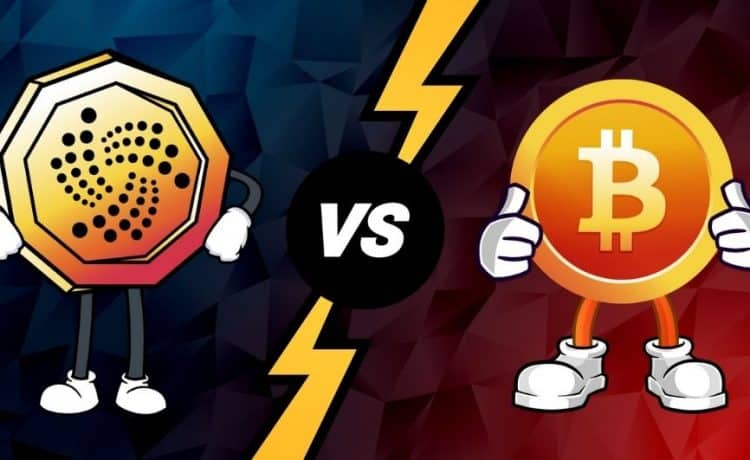 The development and launch of IOTA led by David Sønstebø, Sergey Ivancheglo, Dominik Schiener, and Dr. Serguei Popov began in 2015. IOTA is a one-of-a-kind cryptocurrency that leverages the Internet of Things (IoT) technology. IOTA stands for Internet of Things Application, an open-source, feeless, data and value transfer protocol run by a non-profit organization. MIOTA is the crypto token of IOTA, which works via the connected devices with the IoT in an attempt to not let digital currencies remain limited within the boundaries of the blockchain technology.

IOTA is based on the Tangle system, a DAG (directed acyclic graph) to deal with scalability issues and make free micro-transactions between IoT devices. IOTA is a decentralized distributed ledger technology that has opened doors to newer possibilities and eliminates the need for mining. IOTA is similar to Bitcoin in some aspects, but the dissimilarities between the two cryptocurrencies cannot be overlooked.

IOTA Vs Bitcoin: Similarities and Differences

Here are the similarities and the differences between IOTA and Bitcoins.

Since the beginning, the price of MIOTA has been quite volatile. After its launch, the upward and downward movement of MIOTA’s price had happened frequently. MIOTA’s price significantly rose in August 2017 before falling. It hit an all-time high price of $5.23 in December 2017.

At the time of writing this article, the price of one MIOTA token was $2.11. The MIOTA crypto asset has a market cap of $5 billion currently with a circulating supply of 2 billion tokens.

Compared to IOTA’s current market status, one BTC stands at the price of $54,183.78 and a market cap of $1 trillion along with a circulating supply of 18 million.

IOTA Price Prediction Based on What Experts Say!

MIOTA’s price is influenced by corporate partnerships and media coverage.

The scope of IOTA is not limited to just the crypto token – MIOTA but goes beyond facilitating global trade, social impact, mobility, creating smart cities, and digital identity. Here are few use cases of IOTA:

The IOTA project aims to develop IoT solutions for the world. This technology removes the dependency on blockchain technology by harnessing the power of the IoT and thereby addresses the scalability challenge posed by blockchains. It is already understood where MIOTA is headed in terms of its price and applicability. Hence it is a unique investment option in modern times. Given the huge range of applications of this project, it can prove to be a useful investment asset for the future.